Steven Spielberg knows how to make an adventure film. For decades he has created and adapted unique worlds for the big screen that have become iconic in pop culture. So there is perhaps no one more equipped to tackle Ready Player One, a 2011 novel written by Ernest Cline that is bursting at the seams with 80’s nostalgia and nerd culture. 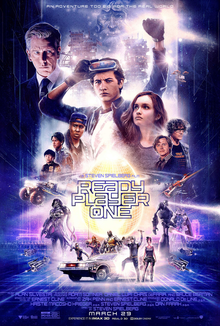 Ready Player One takes place in the 2040’s where most of humanity spends there time engulfed in a virtual world known as the OASIS where they can be whoever they want and gamble away their money playing games. After the creator of the OASIS (Mark Rylance) dies, he hides an Easter Egg within the game that will make the finder the wealthy sole owner of the OASIS. Living in poverty with his aunt, Wade Watts (Tye Sheridan) joins forces with a group of other gamers (Olivia Cooke, Lena Waithe, Philip Zhao, Win Morisaki) to find the egg before the greedy head of a rival company (Ben Mendelsohn) can.

This film celebrates nerd culture like nothing else, at times for better and worse. The character arcs get a bit cheesy at times and if you’re not into gaming, the whole experience might be overwhelming.  This movie is Willy Wonka and the Chocolate Factory for MMO players and the people who understand most of the references in Family Guy, but what makes it work well is the story it tells. Sure, the effects are breathtaking and the pop culture references are fun, but without an intriguing narrative, the film would be a bore.

Ready Player One manages to weave a likable tale with surprisingly heartfelt themes thanks in large part to Mark Rylance’s James Halliday. The brilliant, but socially awkward character uses the game as a means to teach an endearing lesson about connection and taking chances. Rylance’s quirky, loveable performance makes the overall journey one worth taking even if you aren’t a fan of video games or can name all of the characters that pop up in the background. Combined with thrilling visuals and some well timed humor, Spielberg’s latest film ends up being an absolutely blast for anyone who just enjoys a good treasure hunt.