SECRET IN THEIR EYES Who said Holiday films have to be bright and cheerful? In Secret in Their Eyes, Chiwetel Ejiofor (12 Years a Slave) stars as an FBI agent obsessed with finding the rapist and murderer of his partner’s (Julia Roberts) daughter. Nicole Kidman co-stars as a District Attorney and Ejiofor’s love interest. Teetering between murder mystery and suspense thriller, the film reaches Prisoners level darkness without quite reaching that same intrigue.

Ejiofor and Roberts are hauntingly strong in their roles as two characters whose senses of morality falter with each failed attempt to bring the suspected killer (Joe Cole) to justice. In fact, essentially every character in the film gets their hands dirty, making most of the characters interesting enough to account for the film’s relatively scattered pacing. The narrative issues are due in large part to a constant switching between past and present that the movie could’ve done without. Still, passionate leads and an unexpected, albeit twisted, ending help make Secret in Their Eyes decent time well spent if you’ve already caught the major releases. FINAL GRADE: B- 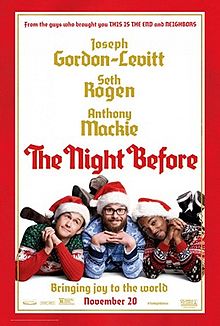 THE NIGHT BEFORE ‘Tis the season for family comedies, but every once in a while, myself and other slightly immature adults, are treated to a raunchy ‘R’ rated holiday film. This year that film… made specifically for the Family Guy watchers and those who can’t get enough of Evan Goldberg movies… is The Night Before. This drug filled, profanity laden comedy features Joseph Gordon-Levitt as a single New Yorker in his 30’s looking to have his last Christmas Eve party night with the two best friends who helped him through the death of his parents: A star athlete with a dirty secret (Anthony Mackie) and a soon to be father on the verge of a mental breakdown (Seth Rogen).

As you should be able to tell from my description, this is a real niche film. If you hated This Is The End or last winter’s would-be comedy The Interview, then you’ll be disgusted by The Night Before. The rest of us with a good sense of humor will find this movie hysterical from start to finish. Michael Shannon, as a former janitor turned wise Christmas sage/drug dealer is alone worth the price of admission. Well timed cameos and fun, yet surprisingly heartfelt chemistry between the three lead actors make The Night Before good enough to excuse a narrative that seems as if it’s making things up as it goes. FINAL GRADE: B+