Anyone who casually follows my blog is probably aware of my love/hate relationship with sequels or spin offs. It’s a simple concept: If a sequel is made with an interesting story that furthers the arc of the previous film’s characters and presents them with new challenges, then I’m all for it. But, if a sequel is made as a retread and/or exists only as a means to capitalize on the popularity of its predecessor, then I have no problem rejecting it. Director Joe Wright’s Pan isn’t exactly a sequel, but it does carry several of the symptoms of a soulless cash grab. 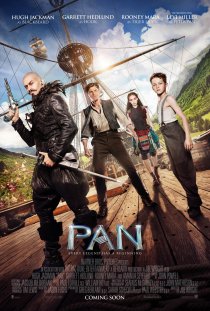 Pan isn’t really a prequel either (It isn’t directly linked to any other film), but rather an origin story of the classic Peter Pan play/novel/movies we’re all familiar with. It begins with baby Peter being dropped off at an orphanage by his mother (Amanda Seyfried). The orphanage (seemingly a retread from what we’ve seen in Matilda or Oliver Twist) is run by a grouchy nun who secretly spends nights selling boys to magical pirates. One day, young Peter (Levi Miller) is abducted and taken to Neverland, where he is forced to mine for fairy dust by Blackbeard (Hugh Jackman). Here, he meets up with a young Captain Hook (Garrett Hedlund) and Mr. Smee (Adeel Akhtar) who help him flee Blackbeard in search of the island’s natives, led by Princess Tiger Lily (played by the noticeably caucasian Rooney Mara). The natives believe that Pan is the chosen one who can lead them and the fairies to an uprising over Blackbeard’s pirates.

If the summary seems a bit rushed and nonsensical, it’s because the movie basically is. Too often the movie feels like it’s being written as it goes along, filled from head to toe with expensive CGI and heavy doses of fantasy clichés. Peter being the “chosen one”? A half-baked love story between Lily white… I mean Tiger Lily and Hook? The source material lends itself to something better than this. It would also be relatively acceptable, if the story made a connection to the original classic in more ways than just including big name characters. What are the origins of Neverland? Why does Captain Hook eventually become Peter’s arch nemesis? Why does Peter Pan decide to never grow up? None of these questions are even touched on and it makes this film feel less like a prequel and more like some generic fantasy rip off.

The one sort-of bright spot is Hugh Jackman as Blackbeard. Before being transformed into a standard sniveling antagonist, Jackman channels his inner Johnny Depp with an opening monologue that is both charismatic and eerie. The rest of the cast is disposable from Garrett Hedlund’s over the top accent to Rooney Mara’s embarrassing attempt at playing a Native American. More screen time for Jackman’s Blackbeard might have made the movie more watchable, but it still wouldn’t have been enough to rescue a mediocre story void of the elements that make Peter Pan special. Pan is almost comically inconsistent and easily forgettable. There is a reason Peter Pan is a timeless fantasy and after watching this film, I’m not even 100% sure the makers of it have even studied the original.

One thought on “Pan (Full Review)”