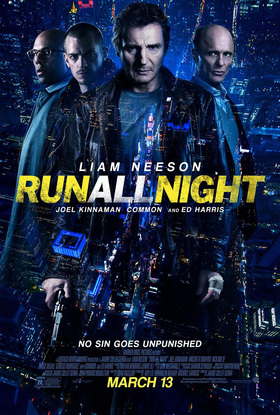 It’s really good to see Liam Neeson branching out and trying some really different roles. Seeing him break his usual mold is always refreshing. Alright… obviously I’m joking. But, kudos to Mr. Neeson for at least understanding what makes the old, grizzly action hero so fun to watch.

This time, Neeson’s retired man with “a particular set of skills” is Jimmy Conlan. A former hitman for his old friend/boss Shawn Maguire (Ed Helms), Conlon is now a washed up drunk who is no longer welcome in the home of his son, Michael (Joel Kinnaman) because of his past dirty deeds. That is, until his son is witness to a murder committed by Maguire’s spoiled, reckless son, Danny (Boyd Holbrook). Killing Danny to save his own son’s life, Jimmy Conlan must shake off the rust for one night to keep his son alive as he is hunted by Maguire, a hired hitman (Common), and the police led by a detective with a grudge (Vincent D’Onofrio).

A movie called Run All Night should deliver what it promises in the title. And although it takes far too long to get into things, once the running starts, it barely slows down. Neeson’s action films have an expectation to live up to (Taken, The Grey, Non Stop) and they also have a low point (Taken 2 & 3). Here, the connection between all of the major players is established well enough to make you care and the action isn’t too over the top to make it as unbelievable as it was in last year’s Taken installment. That isn’t to say that the movie doesn’t have its fair share of cartoony flaws; the biggest coming from Common’s role as Mr. Price. The character is perhaps the sloppiest “trained assassin” ever, killing cops with one shot yet failing to kill Neeson multiple times from point black range when his back is turned. He could’ve been left out of the film completely. Not to mention Common’s acting ability hasn’t improved.

Be prepared to take some mental liberties with Run All Night. The inconsistent cinematography might also get bothersome. But for what it’s worth, the movie has some intensely exhilarating moments that hearken back to films like Harrison Ford’s The Fugitive. Is it a classic? No. Is it even memorable? Probably not. But other than the first Taken, do any of Liam Neeson’s action movies fit those criteria? And yet… we can’t help but be intrigued each time.