Memento. The Prestige. The Dark Knight Trilogy. Inception. There are few directors with a track record like Christopher Nolan’s. His hot streak of not just good movies, but great ones, is uncanny. Over the years, he seems to have mastered the art of story telling without the bloated CGI and over the top action sequences that other blockbusters deem necessary. But at some point, logic dictates that he has to make a bad film. Doesn’t it? 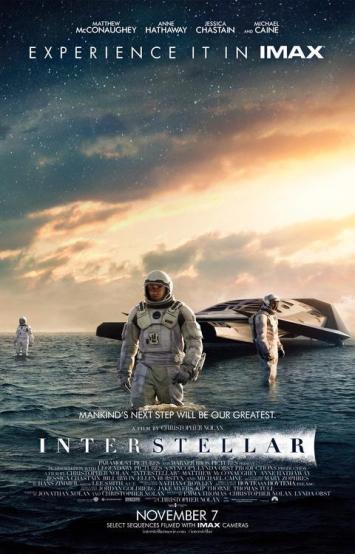 Interstellar, co-written by his brother Jonathon, is Christopher Nolan’s newest work. The film tells the story of a dying Earth’s waning years. Swarming dust clouds are an everyday occurrence. Crops are dying out little by little. There are no more armies and no more engineers. Pretty much everyone is a corn farmer. With the situation dire, the last remnants of NASA (Michael Caine, Anne Hathaway, David Gyasi, and Wes Bentley) plot a risky voyage through a wormhole in space with the hopes of finding a new planet capable of sustaining human life.

Like most of the films Christopher Nolan has both written and directed, this one is long and complex. There is tons of science mumbo-jumbo implemented into the movie that you won’t understand. Some of it, mostly the actual theories and factual science implemented for the film, is conveniently explained in layman’s terms, but a lot of the equations and theoretical algorithms might as well be wizarding spells from Harry Potter. Luckily, the overly convoluted science doesn’t take away from the real story, which isn’t space exploration or a dying earth, but actually the story of a father’s need to do what’s best for his kids even if they’ll hate him for it. Matthew McConaughey is fantastic as widowed father, Cooper. As a former NASA pilot, he is the best candidate to navigate the voyage through the wormhole, but returning from the trip will be difficult, if at all possible.

The overarching relationship between McConaughey’s Cooper and his daughter Murph (played brilliantly by Mackenzie Foy) as well as the chemistry with co-star Anne Hathaway give this movie heart and soul. Nolan knows who to pick for his movies and here he has put together a splendid group. A who’s who of great actors (Jessica Chastain, Matt Damon, Casey Affleck) repeatedly, but pleasantly pop up in the film in unexpected places. And though long, the movie is far from boring. If you enjoyed last fall’s Academy Award winning hit Gravity, then you will be riveted by Interstellar. There are plenty of eye-popping visuals, many of them coming from two shape shifting blocky robots. Like the Batpod in The Dark Knight and the hallway fight scene in Inception, Nolan continues his knack for impressive, but believable special effects through resources other than CGI.

The movie is far too long and the ending will either be a head scratcher or an eye opener depending on how much you pay attention. But the overall payoff is indeed splendid thanks to emotional performances and captivating imagery. Surely, Christopher Nolan will make a bad movie at some point, but Interstellar isn’t it.