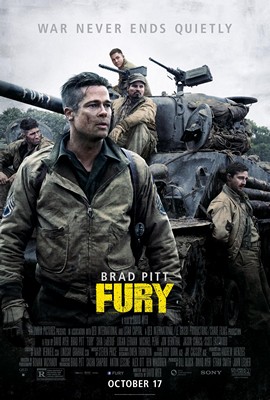 Brad Pitt plays a more serious version of Lt. Aldo Raine in this film that follows a platoon of tank operators in the final days of World War II. David Ayer (End of Watch) directs a phenomenal cast led by Logan Lerman who stars as a young typist offhandedly thrust into battle. Shia LeBeouf gives arguably his best performance ever as the tank’s religiously grounded gunner. The other crewmen, played by Jon Bernthal and Michael Peña are equally as captivating.

The film goes through several war film clichés. Because of that, you won’t miss anything groundbreaking if you manage to never see this film. But along with a strong cast and solid pacing, the action sequences are striking and vivid. More gruesome than many war films, it undoubtedly earns it’s ‘R’ rating, but all of the horrifying imagery is necessary in conveying it’s dog eat dog theme. FINAL GRADE: B+

Ever since Iron Man, it has been admittedly difficult for me to see Robert Downey Jr. as anything other than Tony Stark. But here, RDJ does his best to give new direction to his trademark narcissism in the form of snarky lawyer Hank Palmer. The film, directed by David Dobkin (Wedding Crashers) has the backdrop of a court drama, but it is moreso about the rigid relationship between father and son.

Robert Duvall stars as Joseph Palmer, a stubborn, elderly judge in a small town in Indiana who is forced to seek the help of his estranged son after he is charged with a hit and run. The courtroom elements can get a bit cartoony, especially when Billy Bob Thornton’s prosecuting Dwight Dickham comes into the picture, but the film is nonetheless solid. The family drama will tug at your heartstrings and Duvall and RDJ are both naturally brilliant. FINAL GRADE: B

Luke Evans stars as Vlad the Impaler in a reinterpretation of the classic vampire tale that mixes myth with the factual inspiration for Count Dracula. Ruler of Transylvania after escaping a lifetime of being a brutal soldier for the Turkish army, Vlad is forced to seek the help of a nearby vampire (Charles Dance) after the power hungry Turkish sultan (Dominic Cooper) requests his son and the rest of the kingdom’s young boys for his new army. After drinking the blood of the vampire, Vlad is endowed with all of its powers, with only one catch; he must resist drinking human blood for three days or risk being a vampire for eternity.

A film like this isn’t meant to have groundbreaking plot, but it would’ve been nice if the script didn’t seem razor-thin. Playing out like a super hero origin story, this movie feels more like Ghost Rider than Blade. While Evans is a solid actor, the story seems to clunk along from one action sequence to the next without much explanation or purpose. None of the characters are developed other than the Impaler himself, and even the action sequences are reduced to the same old tricks each time. After a while, even turning into a swarm of bats gets old when we’ve seen it throughout the trailer. In the end, this film is a clear case of wasted potential. FINAL GRADE: C-