Yes, the main antagonist in the film looks very much like Sean “Diddy” Combs. Go ahead, get your laughs out… done? Ok, now let’s get serious and review Captain Phillips. 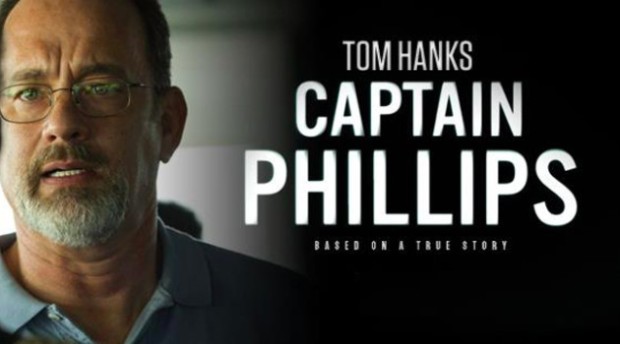 The film, based on real events, tells the story of Richard Phillips, the captain of an American cargo ship bound for Kenya that is hijacked by four young Somali pirates in the spring of 2009. If that sentence doesn’t sound promising enough, then this is not the film for you. There isn’t much humor, heart, or romance. There are no plot twists or jaw dropping action, just two hours of the intense tension that comes with watching any real life hostage situation.

Tom Hanks stars as the title character. He is as good as Tom Hanks always is. He portrays Phillips as a savvy veteran Captain. He is almost always careful, forward thinking, protective, and resourceful. His wit and resolve manage to constantly keep things from going from bad to worse… most of the time. It is his Somali adversary, Muse (played by Barkhad Abdi) that takes the film from intriguing to captivating though. Director Paul Greengrass does his best to make us sympathize with Muse and his impoverished fishermen brethren who turn to capturing ships and holding them for ransom as a plan to make millions. Some of Greengrass’ efforts don’t quite hit their mark. The scene that introduces the group of Somali men as members of a desperate village that choose pirates like a recess football team is somewhat rushed and a bit confusing. Regardless, it is the charismatic underdog demeanor in which Muse carries himself while also commanding respect from his crew, that makes him somewhat admirable. The cat and mouse game between him and Tom Hanks makes the movie.

The film isn’t mind blowing in any sense. In many ways it isn’t anything we haven’t seen before. But the tense hostage scenario within a small lifeboat and the tactical way in which the U.S. Navy carries out Phillips’ rescue manage to effectively make up for the lack of surprises. There are a few other gripes: An occasional shaky camera that makes you a bit seasick while sitting in the theater and an opening scene that seems much more staged than any real life conversation between husband and wife. That being said, once things get moving and those two skiffs show up on Captain Phillips’ radar, the suspense doesn’t settle until the credits roll. And that’s good enough to pay for.

One thought on “My thoughts on… Captain Phillips”